We spent a long time arguing that guns equal gun violence, and swore that we would never have one in the house. Like many people believe, we thought that all gun owners were gun nuts – and that was just not our style.

2020 changed everything for everyone, including us. Staying at home during a pandemic – hearing from friends that people were stockpiling ammo and drowning in all the nasty election drama – was the perfect opportunity to explore home defense options. Maybe it wouldn’t be so bad to have one gun. Just for personal defense. Nothing earth-shattering. Just a practical home defense gun.

We jumped into the internet to get suggestions – gun blogs, firearms brokers, YouTube videos – everything we could find. There was a ton of advice from colleagues and friends as well, all excited that we were making our first gun purchase. We researched barrel lengths, calibers, magazine sizes, and about a hundred makes and models. Buying from the internet seemed scary enough, but we had never even held a gun in our hands before.

It seemed like there were limited choices in gun stores everywhere. We spoke with one of our friends and he pointed us to a local pawn shop. We went there and were shown a couple of guns. And we picked the one that looked the most menacing and felt “substantial” in our hands. 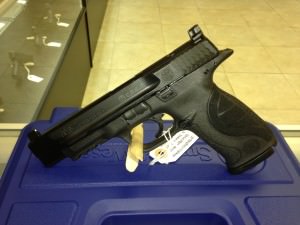 It was an M&P 9 Pro CORE 5” barrel handgun. And it was a thing of beauty. We paid $650 for it (because the owner told us it was a good home defense weapon) and we were happy. But here’s we realized over time:

We got our first lesson as new gun owners. We didn’t know what we were buying. We blindly followed the advice of the salesman and we got a gun that probably would have been perfect for someone. It just wasn’t for us.

We practiced with the gun. Got lessons and shot a bunch of rounds multiple visits at the range. And the more we shot, the more we realized that while this gun was not bad, “our gun” was out there somewhere. We just had to go do a better job buying our next one.

This is what drives us. To educate newbie gun buyers and enthusiasts that there is a good way of assessing the gun you need. And then providing the tools to the new gun owner to get his/her perfect gun or armory. These are our stories.